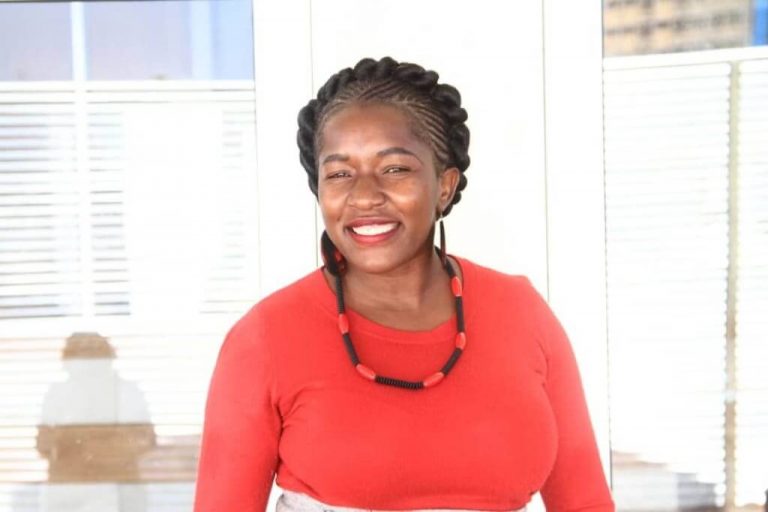 Name: Alina Namutenya Nampila
Organisation: Pan African Women’s Organisation [Southern Africa Regional Office]
PAWO was founded in 1962 with the aim to unite all African Women’s Organisation to allow and exchange of points of views ant to undertake joint actions as well as to promote human rights with a view of eliminating any form of discrimination irrespective of birth, race, religion or sex. In 2017 PAWO was approved by the African Union (AU) Heads of States and Government Assembly in 2017 as a Specialized Agency of the AU with the mandate of consolidating AU efforts in achieving gender equality and women’s empowerment in the continent as outlined in Agenda 2063 and other instruments.
Role: Private Secretary
Achievements: Teacher by profession [taught for 9 years as a Social Studies teacher at different schools]
– Involved in numerous campaigns: HIV/AIDS awareness Campaign, Drugs and Alcohol Abuse, Saving water [Namibia is primarily an arid to semi-arid country and the usage of water need to be conserved] and World Peace Campaign lately involved in the Women’s International Democratic Federation (WIDF) World Peace March in Windhoek, Namibia
– Member of the Ruling Party’s youth wing; SWAPO Party Youth League served as a foot soldier during the National and Presidential Campaign;
– Member of Future Team, African Chapter [An international youth movement aimed at discussing and solving global and local problems, initiating surveys and looking for like-minded people and inspiration focusing on the United Nation’s 17 SDGs];
– Nasser Leadership Fellowship Alumni 2019

The day everything almost fell apart:
Dark days in my life are countless but I do not let them define my destiny. Even then, I can recall moments around September of 2017 until towards the end of 2018 when I left my teaching job to hunt for other greener pastures. It was not easy; I lost friends or rather those I had thought to be friends, however I gained some very good ones.

During that time, I struggled economically to keep my son in school, pay for my apartment rent, food and all the things I needed to sustain me and my two children. I had to take up a few volunteering jobs within the Swapo Party Youth League especially those wherein they were offering small stipends, and that would allow me to cover for me and the kids. On 28 December 2017, I lost my grandmother whom I grew up with and truly loved. Not only was she my inspiration, but someone who would pray for me and encourage me to work hard and serve others with respect.
In August of 2018 while I was volunteering as a Protocol Officer for the 38th SADC Summit in Windhoek, I received an eviction letter as I failed to pay my rent for 2 months; I had no choice but to move out of the apartment and move to a smaller place with my kids something that truly had put my spirit low. I did not want to show people that I was down however I was broken. While I was in the midst of giving up and finding something, a temporary teaching opportunity was presented to me at Rocky Crest Primary School in September 2018 and towards the end of November 2018 I got a permanent job as a Private Secretary at PAWO-SARO. I almost lost hope but the Greatest God and very few good friends kept saving me.

What I have learnt from this experience however is that failures and mistakes often stop people from carrying on, however those mistakes give us lessons to improve. My message to fellow young people is to keep going, keep moving and keep learning.