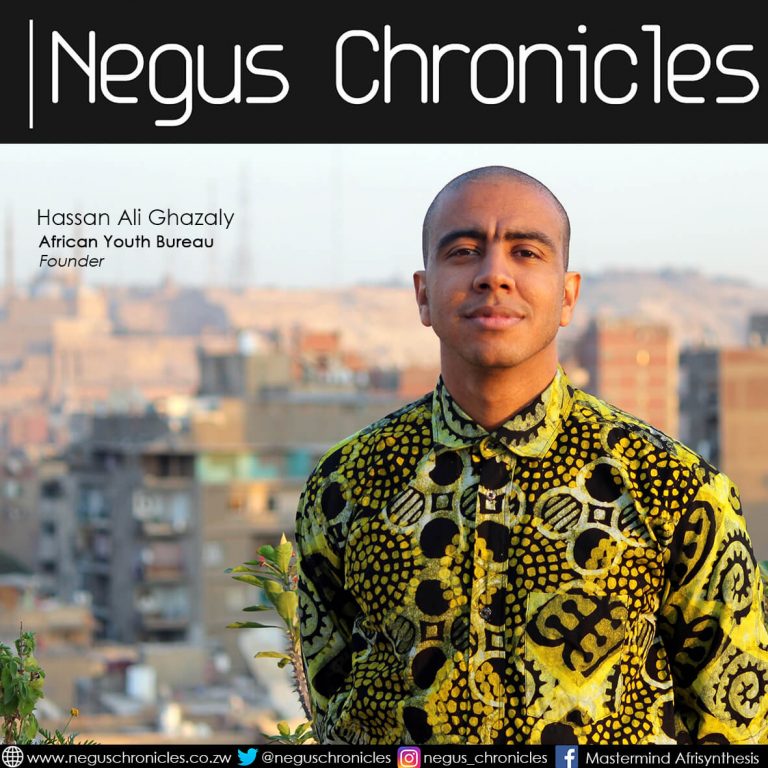 I’m a Pan-Africanist who has passion for making change in my society, noting that my society is not limited to the local level, but it includes the national and regional levels as well. As I work with the slogan, “Egypt is my village, Africa is my country.”, I aspire to see the Africa we want, developed and prospered; hence my area of work mainly lies in building the capacity of African youth in the social and political fields, which will later build the Africa we want.

I believe that growing up in a Nubian Egyptian family and community helped develop my Pan Africanism ideas and it planted in me the seeds of certain values such as respect, love and enthusiasm for all that is black. In addition, my school was located in Zamalek, Cairo, where there was a lot diplomatic houses and embassies.

In Zamalek, we, the sons of the diplomats, traders, policemen, employees and refugees coming from local, francophone, Anglophone, International and American schools, have broken an invisible barrier between the different Afro, Arabic, Western and foreign cultures.

The African Society was the gateway to the African liberation movements where I first learned about Pan Africanism, Gamal Abdel Nasser and his defense of the territorial integrity of Nigeria in 1967, as well as about the Emperor Haille Selassie, and the history of Ethiopia.

In May 2011, the Ministry of Youth and Sports called on youths to travel to Ghana, I applied and got accepted by then the opportunity was cancelled, and despite my frustration, I thanked God as later torrents of water flooded parts of Ghana.

At the time, I started developing the idea of the African Youth Bureau to be a unit that connects the African Youth in Egypt, but the idea wasn’t ready yet. Then, the Egyptian January revolution took place, and I established a local movement called ‘Bulaq Social Movement’ that was aimed at raising awareness about the economic and social rights within the context of the revolution.

I was trying to make a change in my community, and at the same time work on my self-development, hence in 2012, I was training as Researcher at the State Information Service [S.I.S] in the department of the Public Opinion and African Research which gave me a chance to learn more about the political and social map of Africa. Later in 2013, I got a Fellowship to acquire a Diploma in Leadership for Democracy from the Lebanese American University.

In February 2014, I created the African Youth Bureau within the Egyptian Ministry of Youth and Sports, with the aim of reaching the African youth and developing African relations, by establishing partnerships and implementing programs for the continent in collaboration with national institutions concerned with youth and the African Union, as well as of consolidating African values established by the founding fathers of the Organization of African Unity in 1963.

Since then, the Bureau has been seeking to empower young Africans through the development of their economic and cultural capacities through the implementation of knowledge exchange programs and capacity building in order for them to become a dynamic and influential force on the world stage, and to bring us a step closer towards the Africa we want.

The PYU has a mandate from the African Union Heads Of State [July 2006 Summit] and it is an advisory agency for the Youth Commission of the African Union. In 2016, at the Head of States Summit ‘Intergenerational Dialogue’, I shouted slogans against the Israeli occupation in the presence of the African Heads of States as well as the President of Palestine, which highlighted the African position regarding the occupation of Palestine. Noting that the aforementioned situation almost caused my suspension and prevented me from entering the AU again, at that moment, I found myself expressing my opinion honestly without any sort of prior arrangement.

It should be noted that this situation changed the course of my life because expressing my opinion without fear, in the presence of the decision-makers or the highest authorities of the AU, could have affected my career and future or resulted in my imprisonment, noting that it actually resulted in investigations against me on several levels.

However, the relevant authorities understood my reaction and considered the situation as youthful spirit and energy. In 2017, in Sudan, I was elected to be Vice President of the Pan African Youth Union [PYU] for North Africa with a majority of votes over my competitor from Algeria.

Currently, I am trying to widen my scope of development work to include the educational field as well. I consider education to be the key for development and change in the African societies as it gives a chance to work on building the capacities of the children and planting in them the seeds of good values, that’s why I am launching Bezoor Project [seeds] for parallel education which aims at consolidating Leadership in children to create change makers in society.

For me, my ultimate objective in life is to be a changemaker in society, through providing sustainable solutions to the social and economic challenges and creating a Pan African Youth Movement to raise awareness about Pan Africanism at the grassroots level, as well as at national and regional levels.