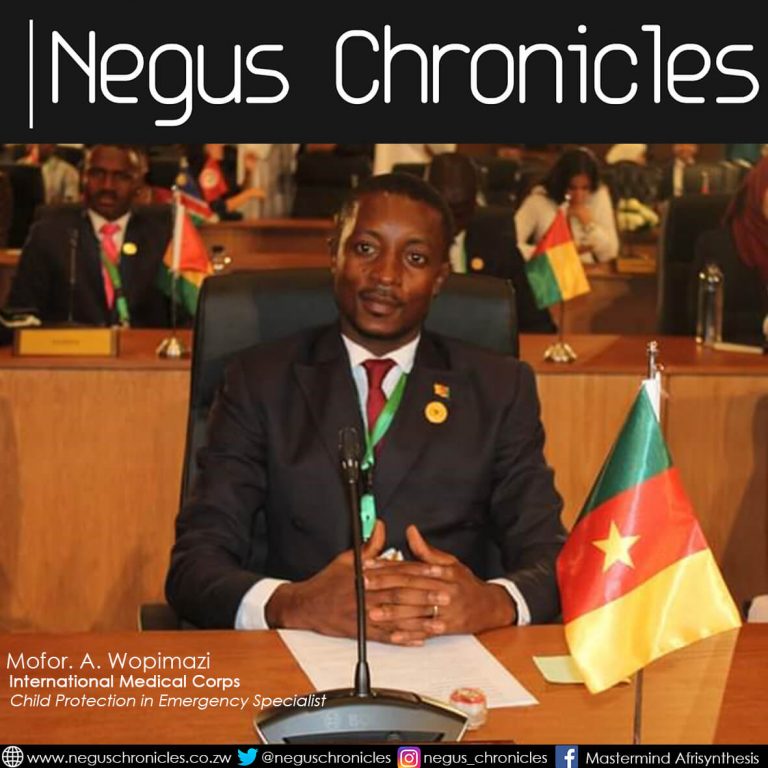 Achievements/Awards:
– Holder of a Bachelor’s Degree in Law, Masters in Strategy, Defense, Security, Conflict and Disaster Management.
– Founder of a charitable/nonprofit community base organization called “Aid Without Borders”, a platform where he not only educates people on the rights of the child but also provide psycho-social counselling, direct support and capacity building development to vulnerable children.
– Supported various projects that address child education and health, gender inequality, and gender based violence among girls as well as sexual reproductive health and rights.
– Alumni of the World Youth Forum 2018
– Ambassador during the Model of Arab Africa Summit.
– Youth Country Representative of the Arab African Council for Integration and Development (AACID).
– Recognize as young African leader during the OSCAR of African Creativity Award ASWAN/CAIRO 2019.
– A member of AYUC Cameroon chapter .

A day everything fell apart:
Since my early childhood days, I have faced many obstacles and have had to overcome many challenges in my life’s path in order to get where I am today. As a toddler, most of my days were spent seeking medical attention as I was born with a physical challenges. I had a condition that rendered my legs basically useless as they were turned inwards facing each other and I was unable to go about, play football or play around other kids.

I had to undergo numerous major surgeries to correct and thankfully by grace I was healed. I say this really played an important part in influencing the work I do now in child protection especially those in emergency situations.

Another major setback for me occurred in 2016 just as I was starting my Masters studies, when while on a tour visit with my mum in Kenya, she passed away on our fourth day in Nairobi. Having lost my father in my first year at university due to cancer, I had now lost both my parents due to tragic circumstances and it really felt like the world was coming to an end.

I realized, at that point in my life how important family fabric is to a young man’s growth and development. With help from my sisters and my work with firstly the National Commission on Human Rights & Freedoms in Cameroon and then the Ministry of Defense [National Gendarmerie Special Force], I was able to pull through and graduated in my Masters program.

Looking back though, I’ve learned many things that only a father and a mother can teach. One of it is “Mistakes are learning lessons: Don’t let fear stop you from thinking big, if you are making bold moves, there is no way to avoid some of them being mistakes.

I have now founded a charitable/nonprofit community base organization called “Aid Without Borders”, a platform where we not only educate people on the rights of the child but also provide psycho-social counselling, direct support and capacity building development to vulnerable children.